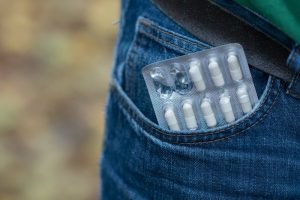 This is the next post in our series on the handling of drug charges in Laredo, Texas. Our last article discussed what one faces after a heroin-related arrest. It is important to understand that both judges and prosecutors take charges involving heroin very seriously and that possessing even a small amount of the drug will carry a mandatory minimum sentence. If you or a loved one have been arrested and charged then it is vital that you contact a criminal defense lawyer as soon as possible. In this article we will discuss a situation that is increasing in frequency throughout society – the defending of charges which involve prescription drugs. If you require assistance then contact us today to speak with an attorney.

Many people make the mistake of thinking that it is not a “big deal” to possess prescription drugs or pills without written authorization from a doctor. It is understandable that people may feel this way. One may reason that doctors would not be able to prescribe substances which are addictive and/or harmful. The truth of the matter, however, is that prescription grade narcotics receive much blame for America’s current “opioid epidemic.” As a result of this, such matters are taken very seriously within our legal system. Depending on the type of substance involved, one may face up to a year in jail for illegally possessing pills. If an individual is caught with twenty-eight grams or more of prescription level narcotics then they will likely be charged with drug trafficking, and my face a lengthy prison sentence.

It is not uncommon for a defendant to face additional charges after they have been arrested with prescription narcotics. Defendants are sometimes found to be in illegal possession of a gun at the same time at which they have pills. It is also not uncommon for someone to be in simultaneous possession of other drugs, such as marijuana, or in possession of drug paraphernalia. If someone is convicted on multiple counts then it is possible that the Court may require that the sentences for each offense run consecutively. This would mean that a defendant must serve all of the time for the first count before time will be credited to the sentence for another offense.

If you or a loved one have been arrested for possessing or trafficking prescription substances then the situation must be recognized as serious. It is important to retain a Laredo prescription drug lawyer who is experienced in handling such matters. Joey Tellez has been licensed to practice law since 2002 and he is passionate about defending the rights of the accused. Contact our office today to schedule an initial consultation.