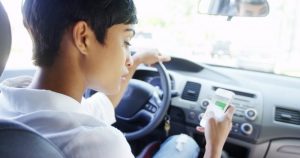 This is the next post in my series on the handling of car accident cases in Laredo, Texas. My last article discussed the process of dealing with insurance adjusters after a wreck. It is important for injury victims to understand that, if they have suffered serious injuries, then it may be some time before a demand for payment can be submitted to the adjuster. This is due to the fact that a victim’s future prognosis must be reasonably ascertained before a request for payment can be sent. It is best to retain a personal injury lawyer, who is experienced in dealing with insurance adjusters, if you have been seriously injured. In this article I will discuss a topic which arises all too often – how distracted driving impacts such cases. If you or a loved one have been injured then contact my office today to speak with an attorney. We handle matters throughout south Texas.

Texas is a state which recognizes the concept of comparative fault. This means that the victim of an auto wreck may recover damages even if they were partially at fault for the incident. Under our state’s laws, a victim may receive compensation as long as they were not more than fifty percent responsible for the wreck. Any award of damages will be reduced by the victim’s share of the fault. This means, for example, that if a victim suffers $100,000 in damages, and the jury finds that the defendant was sixty percent responsible for the wreck, then the victim would receive $60,000 ($100,000 x 60 percent). If, however, the jury found that the Plaintiff was fifty one percent, or more, responsible for the wreck then they would receive nothing. It is important to remember that how the jury will rule, in any given case, will always depend on the facts of the matter.

The foregoing concept is very important in car accident cases where the responsible party was driving while distracted. Such matters may involve a defendant who was driving while texting, talking on the phone, taking photos, watching videos, etc. Say, for example, Joe makes a lane change without signaling and hits another car. Joe suffers serious injuries. Now suppose the facts show that the driver of the second car was texting while driving, and that they could have avoided the accident altogether had they been paying attention to the road. Under these facts, there is a chance that the jury would place a majority of the blame on the second driver. If Joe suffered $1,000,000 in damages, and is only found to be thirty percent responsible for the incident, then Joe would recover $700,000.

Comparative fault is an issue which raises complex questions of fact and law. If you have been in a wreck, and are concerned about whether you are able to recover damages, then it is important that you retain a Laredo car accident lawyer who is experienced in handling such matters. Joey Tellez is a personal injury attorney who prides himself on providing the highest levels of service. He is experienced in presenting matters to juries and our office believes that everyone is entitled to aggressive representation. Contact us today to schedule an initial consultation.