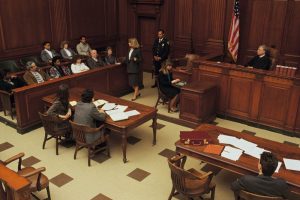 This is the fifth post in our series on the handling of domestic violence charges in Laredo, Texas. Our previous article discussed claiming self-defense in domestic violence cases. We provided information about when claims of self-defense may provide a viable defense. We also discussed what constitutes the use of “reasonable force” when defending one’s self. It is important to understand that one may be arrested for domestic violence even when they weren’t the primary aggressor. However, a proper showing of self-defense at trial may result in a verdict of “not guilty.” If you have been arrested then it is imperative that you speak to an experienced criminal defense attorney immediately. Contact our office today to speak with a lawyer if you need assistance.

Many states do not permit jury trials in domestic violence cases unless a defendant has been charged with felony assault. This is not the case in Texas, which affords residents the right to a jury trial in cases involving misdemeanor domestic violence. Those who have been charged are given the right to have their case decided by a jury comprised of six jurors. This differs from felony cases, which typically allow defendants to have their matter decided by a jury made up of twelve jurors. In either setting, one can only be convicted if the jury unanimously finds the defendant guilty. If unanimity cannot be reached, then the matter will result in a mistrial and the defendant may later be retried on the same charge. Conversely, the jury may come to a consensus that the defendant is not guilty. In that case, the defendant can have the records of their arrest and charges expunged from their record.

The jury selection process begins within the community when a resident is served with a notice to appear for jury duty. Once a pool of candidates is selected, a process known as voir dire will commence. Voir dire consists of a series of questions posed to the potential jurors by the prosecution and the defendant’s attorney. Oftentimes the Judge will also ask his or her own questions. If the Judge believes that a juror has a great potential to be biased, then that candidate may be removed from the jury pool. Furthermore, each attorney will have a number of challenges which they may use to remove jurors from the pool. With that being said, a potential juror cannot be removed due to their race, ethnicity, religion, gender, or for any other protected reason. The case will begin once a jury has been selected and empaneled.

It is especially important that your counsel has extensive experience in dealing with juries. Jurors often do not have legal backgrounds and information must be presented to them in such a way that it is easy to follow and understand. An inexperienced attorney may make the mistake of not considering just how vital a role each juror plays in determining the ultimate verdict. This can easily lead to an unfavorable outcome. However, an experienced lawyer can connect with jurors in such a way that is approachable and fosters a trusting relationship. Retaining an experienced representative will help make sure your case is properly handled from the beginning.

Contact our office today for an initial consultation if you have been arrested for domestic violence. Laredo attorney Joey Tellez has been practicing law since 2002 and he is ready to assist you.