The Process Which Laredo, Texas Defendants Face After A Domestic Violence Arrest 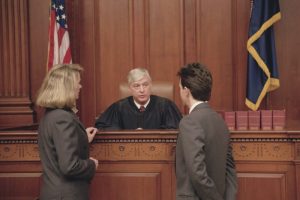 This is the next post in our series on the handling of domestic violence charges in Laredo, Texas. Our last article discussed dealing with false allegations of domestic assault. It is important to understand that, unfortunately, such charges are sometimes based on false claims. It is vital that you take the charges seriously, even if you know that the claims are false. In this article we will discuss the process that one will face after being arrested. If you find yourself or a loved on in such a situation then it is important that you contact a criminal defense lawyer as soon as possible. Call our office today to speak with an attorney.

If you have been charged with a misdemeanor then you will enter a plea of “guilty” or “not guilty” at an arraignment. A trial date will be set and your counsel will receive “discovery” from the prosecution. This is evidence which will include the arrest reports, witness statements, and other evidence. Your counsel will then conduct additional investigation. This can include visiting the scene of the incident (if possible), interviewing witnesses, obtaining documents from Family Court (if the parties are involved in a divorce proceedings or a child custody dispute), and more. If counsel believes that the police gained statements from you in violation of your Miranda rights then they will file a Motion with the Court requesting that the statements not be introduced at trial. This Motion will be ruled on prior to your court date.

The case will then proceed to trial. Each side will make an opening statement. The prosecution will present its evidence and witnesses. Defense counsel will have the opportunity to object to testimony and the admission of evidence. The defense will then present its case and the prosecution will have the same opportunity to object. The prosecution will then have the opportunity to present “rebuttal” evidence. This is not a time for the prosecution to raise new arguments; rebuttal may only be used to directly address points which were raised by the defense. Each side will make a closing argument at the conclusion of the rebuttal phase. Guilt or innocence will be decided and, if a conviction is issued, the accused will be sentenced. If the accused receives probation then the terms of supervision will be clearly outlined.

We cannot stress enough that it is a complicated process to litigate a domestic violence charge. It is important that your lawyer understand the types of issues which should be explored through investigation. Counsel must also be versed in Fifth Amendment law and able to recognize whether the police violated your right to remain silent. Also, the rules of evidence will be strictly enforced at trial and counsel must be familiar with these rules in order to keep objectionable evidence out and also to fully present your case. Our Laredo attorney has been licensed since 2002 and is able to assist those charged with family violence. Contact our office today to schedule an initial consultation.