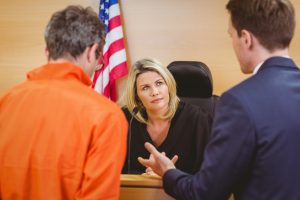 This is the second post in a series of articles about defending against aggravated assault charges in Laredo, Texas. The previous post provided an overview of the key topics covered by this series. It also stressed the importance of retaining a qualified defense attorney to represent your interests. Under Texas law, aggravated assault charges can carry severe criminal penalties including incarceration and significant fines. Defending oneself against such charges is imperative.  It is not uncommon for someone responding to a threat of force from another to be incorrectly charged with aggravated assault. As this article will discuss, providing that such action was taken in self-defense it may be possible to avoid a criminal conviction. If you or someone you know has been accused of a crime, then contact my office today to speak with a lawyer.

A person is entitled to react with the proportionate amount of force necessary to protect himself (or others) when that person is threatened with or suffering imminent serious harm. This concept, known as self-defense, will provide an affirmative defense to an aggravated assault charge wrongfully asserted against the accused. The defendant must be able to provide objective evidence to demonstrate that he was not the original aggressor in the attack and that the amount of force used in self-defense was a reasonable reaction to the initial assault. Evidence such as eyewitness statements, physician reports, body camera or security camera footage may help support a self-defense claim.

Consider a situation in which Sue is having drinks at a local bar. A group of people enter the bar and begin taunting and threatening Sue. While Sue is attempting to leave, a member of the group follows her to the parking lot and threatens her with a knife. In the ensuing scuffle, Sue pulls her own knife and stabs the attacker. Sue flees the scene. When the police arrive, Sue is wrongfully accused of being the initial attacker. Assuming Sue can demonstrate to the judge that she was responding to the threat in the parking lot, her response would likely be viewed as reasonable self-defense.

The success or failure of a self-defense claim will be highly fact specific. Identifying the initial aggressor in a serious altercation may not always be straightforward. Engaging a defense attorney as soon as possible after the event will help ensure that witnesses and other evidence can be preserved and gathered in support of your defense. If you have been charged with aggravated assault, contact my office today to speak with a Laredo, Texas criminal defense lawyer. I also handle matters in other areas of south Texas.